Wonder which instruments transpose or what "transposing" in music means?

What Are Transposing Instruments?

If you play a C on the piano, then you hear a C. Simple, right? The piano is what is known as a non-transposing instrument or in the Key of C. The note you see on the music is the pitch that is sounded.

A transposing instrument is one that sounds a different pitch than the note written.

For some instruments, the note they see in the music isn't the note that is heard. For example, if I was playing my French horn and saw a "C" in the music, the pitch that would come out of the instrument would be an "F."

When I was a young musician, I was told this saying. "When an instrument plays a C, it says its key."

Why Do Instruments Transpose?

There are four major reasons an instrument might be transposing:

Imagine that I don't want to play French horn anymore. Instead, I want to switch to trumpet because the embouchures are similar. The trumpet is pitched in B-flat and the French horn is pitched in F. Will I have to learn all new fingerings?

No. For both instruments, a C is open, a B is second valve, a B-flat is first valve, etc.

Transposition helps musicians that need to switch instruments learn one set of fingerings and then be able to pick up instruments in the same family easily. My example of French horn to trumpet isn't common, but consider how often this is the case for woodwind instruments; a flute player might need to play piccolo or a saxophone, or a clarinet player needs to play a related family member.

If you just need an easy-to-use guide to help figure out transposing from your instrument to concert pitch, then use this table. It will show you the relationship between notes written in your key and concert pitch. 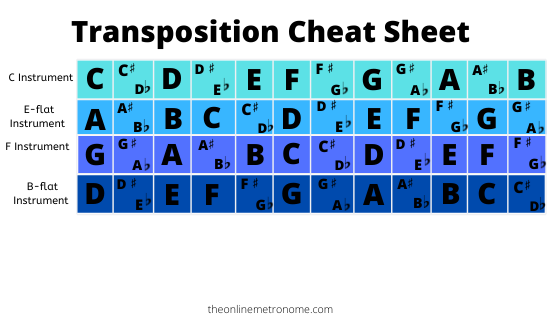 French horn players have to transpose a lot. It comes from the instrument's history, dating back to when players needed to use crooks in order to lengthen the instrument enough to put it in a different key.

This meant I needed to learn to transpose when I started playing in an orchestra. At first, I would write out all the notes I needed to transpose to. This made for really messy music and it took a long time to do. Then, when I turned the music back into the librarian, I had to erase all the ghost notes I had written in.

When I started college, I memorized the interval I needed to transpose to. For example, if a piece was in E-flat, then I would read everything down a whole step. I would just imagine every note being on the space or the line below the note that was written. This was easy for closely related keys but was challenging when transposing to keys like B-flat or C. Or when transposing music with complicated key signatures.

Then one day it hit me, I can just play the corresponding scale degree in the related key. Assign every note in a scale a number. Using the C-major scale as an example, C would be 1, D would be 2, E would be 3, and so on. Instead of reading the notes, I am reading scales degrees in the key I am playing. If I have to transpose, I just change the key signature in my head and play those same scale degrees.

This table shows some of the more common instruments that will need to transpose their music to "Concert pitch." You'll notice that most of them are in the key of B-flat, E-flat, or F. To transpose from this instrument to concert pitch, following the instructions in the "Transposition" column. For example, if I playing a C on a B-flat trumpet and my band director asks "What concert pitch am I playing," then I would need to move my "C" down a whole step (major second) and say that I am playing a B-flat concert pitch. If you are looking to transpose from concert pitch to these instruments, just reverse the instructions. For example, instead of going down a major second when transposing from B-flat to C, just go up a major second and now you have a part written for B-flat instruments.

How To Use A Tuner With Transposing Instruments.

Instrument tuners will always show concert pitch. This means, if you play a transposing instrument, then the note you are playing will not be the note name the tuner shows. For example, if I play a C on my French horn, the tuner will show me playing an F. In order to use a tuner, I need to know how to transpose from the key my instrument is into concert pitch.